Tonight’s post is from an article written in the China Daily by Yang Wanli, and discusses a traditional and very special way of making rice, unique to Yunnan, called 饵块– Erkuai, or soft pounded rice. 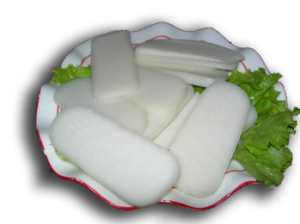 ince is famous for the wide variety of dishes and delicacies it offers. Perhaps the fact that it is home to more than two dozen ethnic groups has something to do with it. The variety and taste of and the ingredients used in dishes can differ from town to town and even village to village, except erkuai, a culinary specialty made of rice, which is omnipresent in the entire province. And while traditional methods of preparing food may be vanishing, a workshop in Kunming has kept alive the old art of making erkuai.  As a type of rice cake particular to Yunnan, erkuai literally translates into “ear piece”, a reference to one of its common shapes.

Erkuai has a history of 400 years. Although common in the entire province, it is said that the best erkuai is available in Guandu district of Yunnan’s capital of Kunming, where it is said to have originated. As the ancient center of Yunnan’s capital, Guandu is famous for its traditional way of making erkuai.  “Making erkuai was like a ceremony before Spring Festival when I was a kid,” says Pan Yunquan, a 67-year-old resident of Luofeng village in Guandu. “It used to be made only once a year.” Since Luofeng has the credit of making the most delicious erkuai in Guandu, the delicacy available there is the best of the best.

In days past, people would not make erkuai at home but at a public mill shared by residents from two or more villages, and hence the annual “ceremony”. The mill in Luofeng village had a great reputation in Kunming and even other border cities. “The mill used to be open from late December to the eve of Spring Festival. Workers were divided into two groups and had to work constantly because a lot of people waited for their turn to make erkuai,” Pan says. At times, the queue used to be hundreds of meters long. Eating erkuai during Spring Festival is a tradition in Yunnan, and in the old days even the poorest families followed it. People carried newly harvested rice in cloth bags and waited outside the mill sometimes for two days. Generally, a family made erkuai from 20 to 50 kg of rice every year.

Rice is the only ingredient used in erkuai. Rice of the best quality is washed twice and then soaked in cold spring water for about an hour. After that, it is steamed twice. “Washing and steaming the rice twice makes erkuai whiter and softer,” Pan says. There are no strict rules for making erkuai, he says. It depends on experience. “Take steaming for example. Once water starts dripping from the hay-made pot cover, it is

time to take the steamed rice out.”  Steamed rice is quickly put into a stone mortar and later pounded with a wooden pestle. But this is a special mortar and pestle, called mudui in Chinese in which the mortar is fixed into a hole dug in the ground so that its mouth is even with the floor level. The pestle is fixed to a huge horizontal wooden lever and needs four to six people to operate.

After the pounding, the rice becomes soft and gummy like plasticine, and is shaped on a wooden board. Erkuai is generally shaped like a mini pillow after the soft rice is kneaded to push the air bubbles out, and gives off a fragrant, appetizing aroma. Erkuai is loved by people in Yunnan not only for its simplicity, but also because it can be cooked in several ways. It can be cut into slices and served stir-fried with vegetables and málà (麻辣), a fiery mixture of dried red chilies, Sichuan pepper and salt.

It is popular as street food, too, grilled, barbecued and rolled around fried breadsticks with sweet or savory condiments added, resembling a Mexican burrito. The sweet types contain a sweet brown sauce and peanuts, while the savory types are mixed with preserved bean curd, bean sprouts and various other toppings. This method is particularly popular among Yunnan people and savored as a quick and delicious snack. Besides, erkuai can be also made into dessert with sweet fermented-rice and eggs. Many families use finely shredded erkuai and cook it like noodles.

The traditional method of making erkuai in Guandu was listed as an intangible cultural relic of Kunming in June 2005. In March 2010, authorities built a workshop in 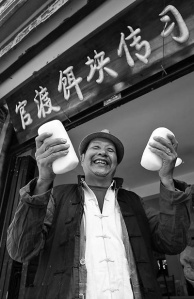 Guandu to demonstrate the tradition way of making erkuai, which disappeared about 30 years ago. An erkuai cake weighing 1 kg made in the workshop sells for double the average price of machine-made variety. A worker, surnamed Ding, says theirs is the only shop selling handmade erkuai in Kunming, and attracts many customers from across China and even aboard, especially during holidays. On May Day this year, the shop sold 480 cakes made out of 300 kg of rice. Pan says the workshop brings back memories for most senior residents. “Listening to the pounding of the pestle is like listening to music. The smell of rice is so sweet that it brings back memories of our childhood.”

Erkuai keeps fresh soaked in clean water for up two months, and it is said that fishermen used it to repair small cracks in their boats.

The description and background come from an article in the China Daily, as do all but one of the photos – the other comes from about.com.

Add to your RSS feed